March has come and gone, and April is well underway! Let’s take a moment to reflect…

…woah. Okay, let’s break that down a little bit:

I got SO MUCH DONE on this story!

It’s been going so well, I’m very, very pleased! And yes, you read that right, I am working on the sequel already. I’ve actually been working on the sequel in bits and pieces for some time. It’s gone through several iterations, so I’m not even sure if this one will stick, but I had a great idea for a scene, so I had to write it down 🙂

HA! Suck it, negativity! I did not let you defeat me this time! The self-edit is done, and now it is in the capable hands of my beta-readers…

Okay, I didn’t finish the outline, but I DID get a lot of things written down and worked out, so I feel pretty confident that I can proceed from here. Speaking of that, let’s talk about:

What’s Coming Up in April

I’ve set my Camp NaNo goal at 50,000 words this month, but my stretch goal is 80,000 words, roughly the length of the last Avengers fic I wrote, “Clarity“. I would love to have this first draft finished by the end of April, but I’m being realistic because (I’ll be honest here) I’m exhausted. Like, really really tired.

I’m not even going to make a writing goal for this fic in April. Because I’m crazy (see above), but I’m not that crazy. If the writing for “Good Intentions” is going well, who knows what might happen, but I’m not gonna commit myself. However, my posting schedule shouldn’t be affected (like it has been in months past), since I have several chapters in reserve that just need tweaking.

And now, the real reason you all read this blog:

You might recognize this picture that got passed around the internet several years ago:

However, that is not, in fact, a baby giraffe (seriously, giraffes are huge, yo, even as babies…), that is actually a dik-dik!

The dik-dik is a tiny species of antelope (they barely grow over a foot tall!), that gets its name from the whistling call it makes when they’re upset or alarmed.

Here’s a clip (their noses extend when they whistle and it is THE CUTEST THING I’VE EVER SEEN!!!): 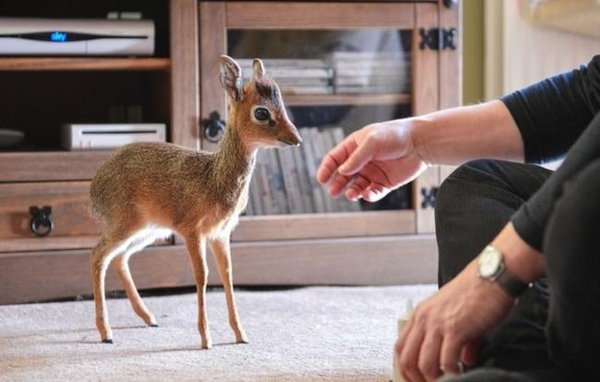 There you go, your dose of cute (and reminder not to believe everything you see on the internet ;P). See you next time!