2017 is just flying by. If it could slow down a just a smidge I would be fine with that, actually. No? Alright then.

Here’s a recap of my goals for the year, in case you don’t want to go back and read the original post:

So, my goals this year haven’t quite lined up the way I would have liked them to. I’ve gotten a lot of things done, just not quite as quickly as I imagined I would. I’m already making notes of what went wrong and how to craft better goals for next year, so this weirdness shouldn’t happen again.

For now, here’s my WordKeeperAlpha graph for the year so far, just so you can see what I’ve accomplished: 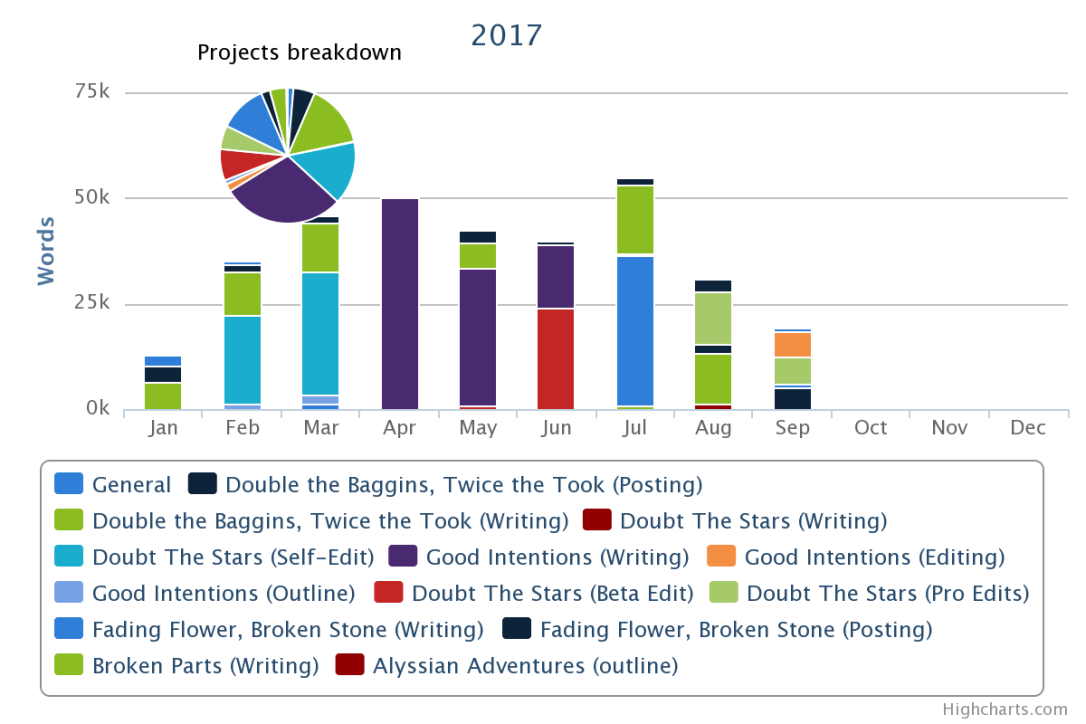 The productivity has definitely trended down this quarter, as I kind of hit my burn out point (and also, you know, Harvey’s an asshole).

I feel bad about it, but there it is. I did do Marvel things though, because I started “Broken Parts” which I’m very happy about. And I ended up finishing DBTT and the sequel, which was more than I thought I would do, so yay!

Oh, and this was the beginning of Harvey’s unwelcome visit to my area, so…yeah. I got writing done, but some of my chapters didn’t get posted. I did write over my 5k words, just not on the story I planned (because it was already done! \o/). Overall, it wasn’t a complete loss. Except “Good Intentions”. RIP my good intentions for this fic.

I got the copy edits on Doubt The Stars done (barely), but I didn’t get it sent to the proofreader until October (not my fault, there was a delay I didn’t anticipate). So I’m a little behind on that, but it’s going to work out, I think. More on that as it develops. I got all my chapters posted and I managed to write 2,168 words. So I didn’t fall quite as far behind on this month, despite my sad looking bar graph.

I have a love/hate relationship with Q4. On the one hand, the holidays and NaNo. On the other hand…the holidays! And NaNo! Let’s see what we can do with these last few months of 2017.

I know, it doesn’t look like much, but…I need this, guys. Just…trust me.

See you guys next time!