I did some things, let’s talk about it and stuff. 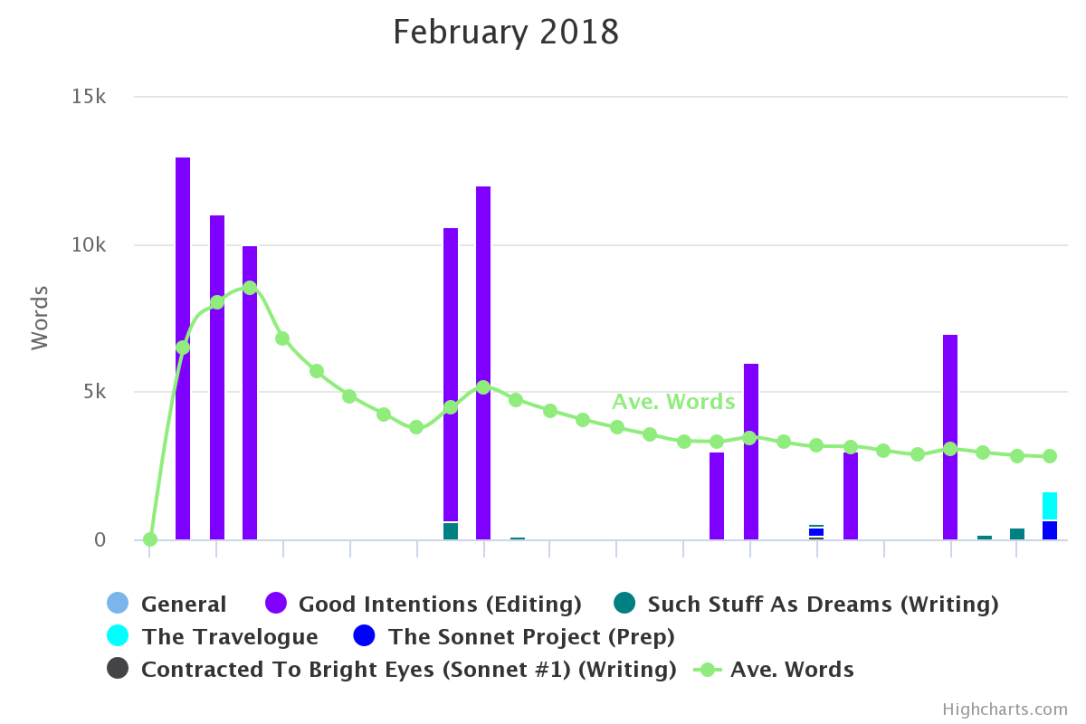 As you can probably see, I did a lot of my work on the weekends this month. A million blessings from whatever deity happens to be listening on poor Imaginary Boyfriend for putting up with me. Seriously. My weekdays have been taken up by so many things lately, it’s made it so difficult to get anything done. Alright, let’s break it down.

I’m actually kind of surprised that I got anything done on this. I’m pleased, but definitely surprised 😛

I’m still not really setting any goals on this story, but I’m still planning to chip away at it, bit by bit.

I finished the first pass of editing!!!

I have an actual plan to finish this up before I wither and die, which is also exciting. Stay tuned!

I’m counting these together because it’s really the same project, just separated into two word counts. So…I’m kind of writing a short story. Several short stories. A collection, even.

So, the plan is to write a set of short stories based on the sonnets of Shakespeare, telling the stories of some of the interesting side characters in my Shakespeare in Space series. I wasn’t excited about it at first, but I’ve done some outlining and now I’m really excited about it. I have to iron out some timeline things before I can really get started, but keep an eye out for further developments.

Still working on this. This past week was painful and I’m not fully prepared to talk about it still.

What’s Coming Up in March

My fantastic February put me back on track for the year, so I’m lowering my WordKeeperAlpha goal to 35,000 words, in preparation for Camp NaNoWriMo coming up in April.

If I finish this, then there will be 50k scenes left in the editing of this fic, which I will leave as my Camp NaNo project. It should be fairly simple. The second goal will be a little more difficult to achieve…

I have so many things going on right now, that honestly, I don’t care where these words go. Short story, novel, new fanfiction?

I’m here for all of it. Let’s make this happen.